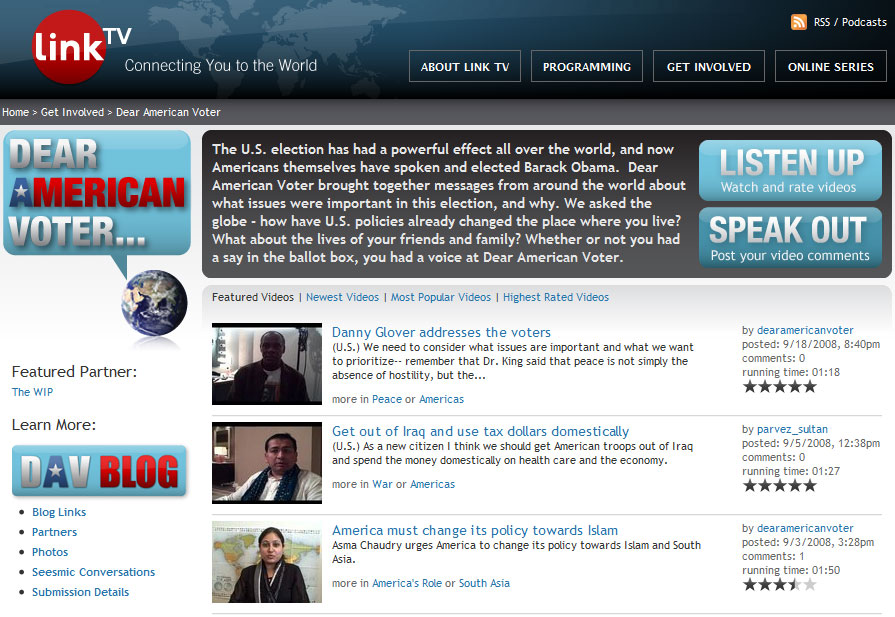 After a few months of interning at a small, independent television station called Link TV, which broadcasts internationally-minded documentaries, news reports, and films, I was hired as a new media assistant to work on an interesting project. It was called Dear American Voter. The idea was that the 2008 American presidential election would have a wide-ranging impact on global politics, and Executive Producer David Michaelis wanted to give people from other countries, or folks who are simply globally-minded, a platform to discuss American political issues. Of course, Americans would also participate in the discussion. Dear American Voter became an online video discussion website in which you could submit a video of yourself talking to your webcam, and people could then respond.

Mind you, this was in 2008, when the original iPhone didn’t even have video recording capabilities and Facetime was still years away. Our emphasis was completely on webcams or simple FlipCam-esque “good enough” quality videos.

At the start of the project, we had a difficult time finding people who were willing to appear on camera to express their opinions. For people who aren’t actors or television presenters, it’s a very intimate and potentially embarrassing thing to appear on camera, with the added pressure of presenting an articulate opinion about a complicated political issue. And with a webcam, you are often inviting the viewer into your home. It’s entirely understandable that people were self-conscious and hesitant. Of course, there are about 1000 times more video bloggers online nowadays than there were in 2008.

To bolster the viewer-produced videos on the site, we produced our own segments and interviews to spark discussions, but even those were met primarily with text replies. Our site infrastructure was also a little lackluster when we started, but the tech team did make many website improvements as the DAV project progressed.

Eventually we partnered with an internet startup that had already created an online video chat website called Seesmic. It essentially worked in the same way as our site (you post video messages and replies as if it’s a message board), but the user experience was much smoother, and more importantly, the site already had a community of people that were happily participating in online video discussions. The majority of Seesmic users were Americans, but we could still discuss the topics of the day with an emphasis on international politics.

On once occasion, a group of women from South Africa were visiting our San Francisco office; one by one I had them sit in front of the webcam, to share with both the DAV and Seesmic communities. They were incredibly sweet and were one of my favorite parts of the project:

I was happy to appear online myself, posing questions to the community as the voice and face of Dear American Voter to the Seesmic community. It was a nice change of pace from staring at an email inbox all day. Twice a week we’d have a meeting to decide on a topic, then I would take a minute to research and think about it, and I’d formulate a discussion starting point. I didn’t write any sort of script because the medium of webcam video shouldn’t be rehearsed, I think. There’s nothing worse than a corporate Youtube video that is intentionally designed to look amateurish. I found some glee in being an on-camera participant and advocate of this part of the project. (The Seesmic video chat site has since shut down and our discussions are no longer online).

We got a little exposure on blogs that focus on independent or international media:

I look back with pride on our little online video discussion project which we did in a time before every media organization was looking for user generated content. I was reminded of this today as I was reading through Al Jazeera America’s job listings, some of which are focused specifically on online video. Naturally, I’ve already sent them my resume.

PS. Some of the criticism from far-right blogs were particularly amusing to me. Later, Link TV was even featured on Glenn Beck’s big board of evil media corporations, which was also shown on The Daily Show: